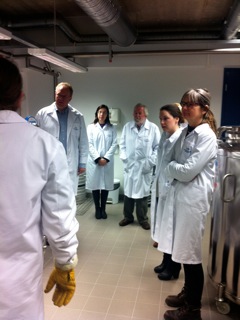 Here’s me having fun on a visit to the Estonian Gene Bank in Tartu in November 2012, the world’s first national population gene bank. What a fabulous trip that was; a hotel room like a medieval princess’s boudoir, snow, forest fruits and nuts, and the most up to date technology all around. A combination of ancient and new which perhaps precisely captures what genetics is all about.

First forays into genetics mostly concerned guinea pigs and their many babies. In later life I have taken more interest in ethical and social issues in human genetics. My  book Ethical Challenges in Genomics Research, Springer, was published in 2012. The book examines the difficulties presented by genomics research for a research ethics framework that has been developed to deal primarily with clinical research. A major theme of the book is that the development of research ethics since the Second World War has travelled in a direction that protects the subjects of research primarily through the valuing of individual autonomy. An emphasis on autonomy however can lead to problems which are especially highlighted in certain areas of research including genetics and genomics. However, a close examination of the original context for the development of codes of research ethics should remind us that we ought also to be placing great emphasis on responsibility, merited trust, and free and open discussion and debate about moral issues. These will help to address current problems in research ethics as well as capturing more accurately the moral problems that have historically arisen in the conduct of research on human subjects. The book draws upon research in psychology which can be of help to us in addressing moral questions.

Followng in from this work, I then plan to develop further work on ethical and philosophical issues in data sharing in genomics. This work will deal with the intersection of issues in ethics and in the valuing of knowledge. This broad area represents a long standing interest; I first examined such problems in the context of self-deception, a state in which the norms of rationality are apparently violated.

I have worked in relation both to clinical genetics and to genomics research. Issues covered include analysis of policy concerning the genetic testing of children,  communication within families affected by genetic conditions, and responsibilities of family members.

Report of a meeting on direct to consumer genetic testing

Policy recommendations for carrier testing and for predictive testing in childhood: a distinction that makes a difference

The causation of disease: the practical and ethical consequences of competing explanations